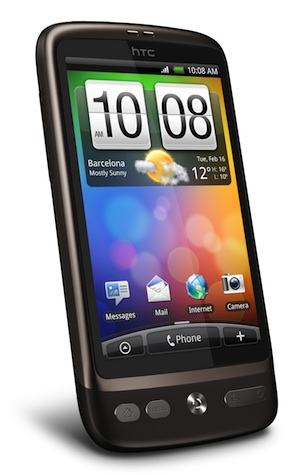 It took over at least two years, but I finally got a smart phone. An HTC Desire.

The iPhone, whilst appealing, never really seemed to end up in my possession for one reason or another. Adopting early or following the masses has never been my way. In fact, I’ll happily go the other way, with all of it’s bumps and bruises, just to show it can be done.

The HTC Desire is a fantastic phone. It’s smooth to touch and, being powered by a 1ghz snapdragon processor running Android, is also very smooth to interact with. The UI (powered by HTC’s Sense) flows from one state to the next. Nothing catches you by surprise.

Comparison to iPhone I’m no seasoned iPhone user, however we do have one in the family which I am more than guilty of pinching for my own benefit quite a bit. The HTC Desire is in some ways a better experience.

First and foremost is that Android works on a different level to iPhone OS. Android supports multi-tasking out of the box, whereas iPhone OS will not offer this until version 4.0 is release later this year. Android phones, by design, also have 4 more hardware buttons than the iPhone’s 1. I can hear simplicity purists out there shifting in their seats as they read this, but it actually makes the phone more versatile.

Apple use a software review process to ensure that all of the guidelines (including ui guidelines) are adhered to. Google, through the use of physical buttons, have designed a contract with the developer that cannot be broken. Let me explain (from left-most button to the right-).

The home button As on the iPhone, the home button will snap you straight back to your home screen no matter what you’re currently doing. It also doubles as a “open processes” button when held down allowing you to swap between applications which are open in the background.

The scrolly thing The scrolly thing, which is also the “click” button, is an optical mouse turned up-side-down. It functions in the same way a track-ball does, albeit with no moving parts. It’s another part of this phone which feels smooth to touch.

The back button The back button is easily the best and most used button. I love this button as much as it is legal to love a button as it releases the full power of the multi-tasking ability of the phone. Say I am reading my twitter feed and someone has posted a link which I want to follow. In the Apple world hitting this link would either a) close the current application and open Safari or b) open an instance of safari within the current application displaying the page (which is simply more work for the developer). From a legal standpoint it can also allow people to view websites in your application that you don’t want associated with it. In instance a the user, once they have finished reading the contents of the webpage, cannot get back to the Twitter stream without first closing Safari and re-opening the Twitter application.

However, on the Desire a simple click of the back button will instantly take you back to the Twitter stream. This is something the iPhone can never do due to it’s lack of a back button.

The back button also closes open dialogues or modal windows and takes you back when browsing websites.

The search button Being a Google connected device, search is obviously quite prevalent in the design of this operating system. That said, I don’t actually use it that much. The search button will open a search dialogue which pertains to the current application (if the application supports it or the whole phone if done if otherwise). If done from the web browser, the search context is obviously the web, if done from the calendar, the calendar will be searched.

The Internet The web browser named simply “Internet” is an intuitive web-kit based app. It has a number of positives over Apple’s Mobile Safari.

When using an Android powered phone like the HTC Sense you can do this amazing thing called “choosing for one’s self”. That is, you are not locked into anything. For example, a simple download from the Market (app store equivalent) will give you a totally different keyboard implementation. Hell, you don’t even have to distribute your apps through the Market.

Down sides There is only one bug that I’ve suffered from with the Android operating system. There’s a known bug with switching from Wifi to 3G. For some reason sometimes the 3G just doesn’t initialise again. The solution is to turn the phone onto Airplane mode and off again.

Conclusion This phone has changed my life. I’m very happy with it even if it does give me an excuse to play pointless tower defence games on the bus.